The biggest takeaways from Michigan State’s loss to Ohio State 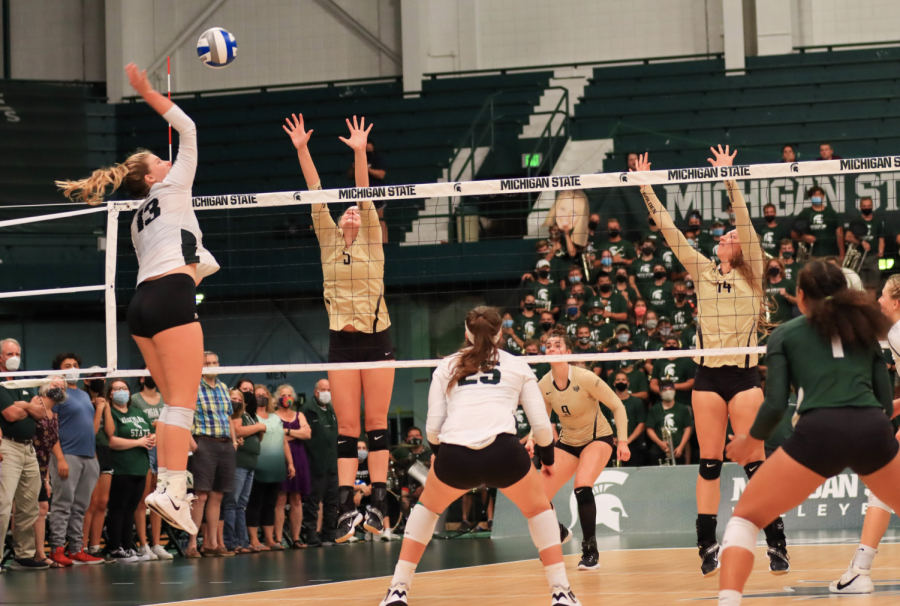 EAST LANSING — On Friday evening, the Spartans were defeated 3-0 by the Ohio State Buckeyes. Here are the three biggest takeaways from the match:

The Spartans need to improve their defense

Facing such a difficult opponent, the Spartans need a defense that does not break under pressure. In the first set, MSU consistently fell behind Ohio State. The front line blocks were not there to stop critical buckeye kills. The back line picked up what they could, but the Spartans struggled to gain an upper hand on the Buckeyes.

Starting with the second set, the Spartans fixed their front block problem. Sarah Franklin and Naya Gros made for a nearly unstoppable combination when blocking Ohio State’s spikes. However, what the Spartans made up for in attack blocks, they soon lost in area blocks. Libero Talia Edmonds couldn’t quite reach critical kills made by the Buckeyes.

Facing an unrelenting Buckeye offense, the Spartans defense continued to be a cause for concern in the third set. Often, the Spartans would set up a well-needed spike to take an offensive lead only to be blocked by Ohio State’s front line. This prevented MSU from closing the lead as Ohio State continued to develop during the set.

MSU flourishes when it controls the ball

The majority of Friday’s game saw the Spartans trailing, trying to close whatever lead the Buckeyes managed to gain. This caused MSU to play defensively for the majority of the game. Rarely were the Spartans allowed to develop an offensive rhythm throughout the night.

However, when the Spartans can get ahead, they really shine. With Cecilee Max-Brown and Franklin pulling the Spartans ahead in the second set, MSU was able to demonstrate its offensive capabilities.

The Spartans outside hitters managed to put pressure on the Buckeyes defense when they managed to get in rhythm. Both Franklin and Max-Brown scored 10 kills with Biamba Kabengele scoring another seven.

Unfortunately, MSU couldn’t maintain its offensive foothold for the entire second set and quickly fell back behind Ohio State.

Coming off of a loss isn’t easy, but the Spartans will need to recover to face Minnesota Saturday.

One key area for improvement is service errors. Spending the majority of the game trying to close Ohio State’s lead, the Spartans needed every offensive opportunity they could get. With nine total service errors throughout the match, MSU continued to cut its momentum short. This only added on to the obstacles which the Spartans faced during the night.

Another area which continued to give the Spartans trouble was attack errors. While not as bad as service errors, MSU still needs to reduce its offensive turnovers. Facing such a challenging opponent, every point matters. Reducing attack errors is crucial for developing that offensive momentum with which the Spartans thrive. Giving players like Franklin and Max-Brown time to get into a rhythm can only lead to more wins for the Spartans this season.

If the Spartans can bring their errors down any amount, they will be in better shape to face Minnesota.