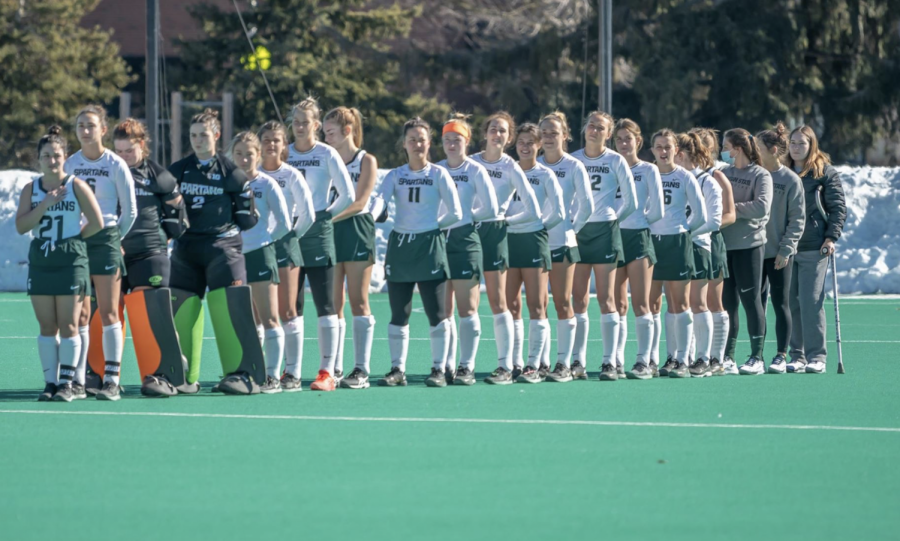 EAST LANSING – Despite a strong effort on the defensive end against the No. 1 ranked Iowa Hawkeyes, the Michigan State Spartans dropped their second straight game on Friday to move to 6-3 on the season.

Although only down two goals at the half, the Spartans struggled to gain any offensive momentum and were unable to contain the Hawkeyes the rest of the way, eventually losing 5-0.

The Spartans faced their second No.1 ranked team in a row after losing to previously top-ranked Michigan in Ann Arbor last week.

Hawkeye Esme Gibson struck first just over four minutes into the game, her first of two goals. Shortly after, some heavy rain rolled in and completely changed the nature of the contest. As spectators got out their umbrellas and ponchos, the artificial turf field became a swamp, with water splashing above the players’ heads with every whack of the club. The torrential downpour stopped just before Iowa struck again with six minutes to go in the half off a whizzing penalty corner shot from Anthe Nijziel. Despite Iowa getting up nine shots to Michigan State’s zero, a strong first-half performance from goalie Monique Jardell helped to keep the Hawkeye lead to 2-0.

Michigan State continued to struggle to get the attack moving on offense in the second half, which meant that two more goals for Iowa in the third and another in the fourth sealed the deal on a Spartan comeback. Jade Arundell got some time in front of the net for Michigan State, taking over for Jardell in the third period. The Hawkeyes didn’t give the Spartans even a chance on offense, allowing a single shot the entire game while racking up 29 shots themselves.

Michigan State head coach Helen Knull highlighted after the game the importance of “not just being here physically, but mentally and ready to go.”

“We did not come out ready to play from the first whistle,” Knull said.

The Big Ten is dominating field hockey at the moment, holding seven of the top nine spots in the NCAA’s updated rankings. Michigan State may be 0-3 in conference play, but it’s impossible to find another team in the country that’s played a tougher conference schedule so far (their third loss came to Ohio State, currently ranked ninth).

Michigan State is now 6-3 overall on the season while Iowa has improved to 13-0. The Spartans look to end their two game skid at their non-conference matchup with Miami (Ohio) this Sunday, Oct. 10 at 1 p.m.

“We’ve got to take our lessons from today in terms of coming out flat to start; we did not value possession in the first half,” Knull said. “We just have to be better on Sunday at the start against Miami.”