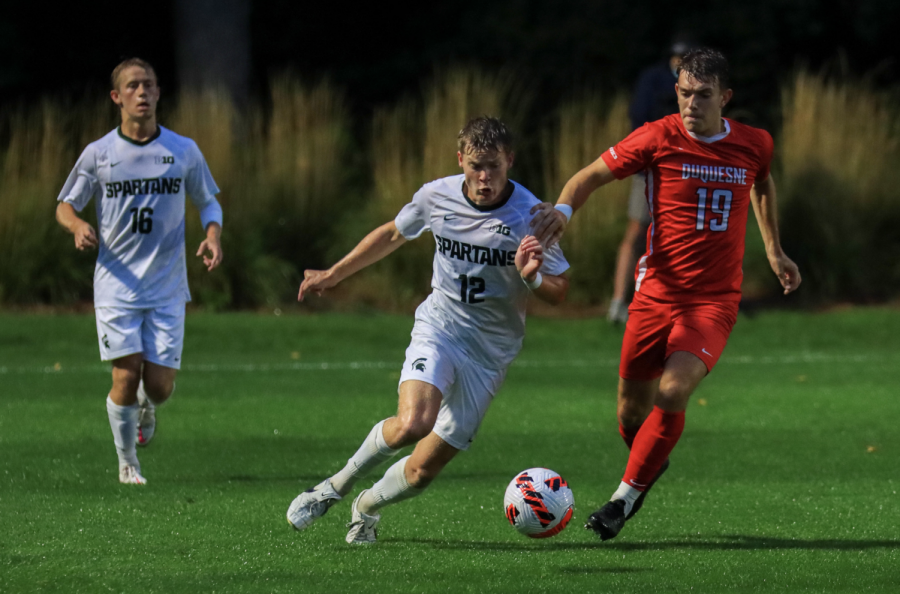 EAST LANSING— The dynamic duo of seniors Farai Mutatu and Jack Beck struck again for the Michigan State men’s soccer team as they earned a 1-0 victory over the Duquesne Dukes on Tuesday night. Mutatu registered his fifth goal of the season and once again led the Spartans to another win.

He was named as the Big Ten Offensive Player of the Week on Tuesday after scoring a hat trick in a 4-3 victory against Notre Dame on Sept. 14. He became the first Spartan to score a hat trick since Jay Chapman in 2012, who now plays for MLS side Inter Miami CF.

“Our goal today was to keep a clean sheet,” Mutatu said. “As long as we keep defending together and creating chances at the other end, we’ll be in a good position.”

Last week, the Spartans concluded a three-game road trip with a 1-1 draw against Wisconsin in the Big Ten season opener. Head coach Damon Rensing rotated the starting XI against the Dukes by including midfielders Jacob Cromer and Kellen Landefeld and leaving out players like Louis Sala and Luke Morrell, who played a lot of minutes last week.

The first high-percentage scoring chance for the Spartans came in the 10th minute of the game where midfielder Michael Miller had his curling shot saved by Dukes’ goalkeeper Domenic Nascimben.

Not long after Miller’s effort on goal, Mutatu opened the scoring in the 15th minute after a free-kick from Beck made its way to Mutatu inside the box, who headed it past Nascimben to make it 1-0.

“Farai (Mutatu) and I have a lot of chemistry together that goes back a lot of years and in the system that we play in, it allows for a lot of opportunities for us to combine,” Beck said.

In the 35th minute, MSU senior goalkeeper Hunter Morse came up with a crucial save that denied Dukes’ forward Logan Muck the equalizer. Mucks’ long-range effort was the first shot on target for the Dukes in the first half.

Just before halftime, Dukes’ forward Jayden Da received a yellow card after an aerial collision with MSU defender Will Perkins. It was the only yellow card of the game.

The Spartans went into the halftime break with a 1-0 lead and rotated many players throughout the first half. Defender Olu Ogunwale and forward Conner George were subbed in late in the opening half to help close a challenging first 45 minutes.

“I thought we played really well to get the goal, but we got a little sloppy towards the end of the (first) half,” Rensing said. “And then we came out really well in the second half.”

Rensing said the objective was to add a second goal and keep the clean sheet going into the final half.

Immediately after the referee signaled the start of the second half, the Dukes had a goal ruled offside which was a close call for Rensing’s side.

Miller had another shot saved in the 54th minute where his volley inside the box hit the chest of Nascimben and denied Miller another shot on goal.

It was not until the 72nd minute of the game where Mutatu had another chance to increase the lead after a scramble inside the box from a corner kick led to his shot going wide of the post.

“We could have been more clinical in the final third but I think that will come [with time],” Mutatu said.

To close out the game, Rensing added a third center midfielder to win aerial battles and keep possession in difficult, rainy conditions.

After a long spell of possession and counter-attacks, the Spartans held on to the 1-0 lead and secured their fourth victory of the season, making them 4-3-1 heading into a challenging weekend.

“Our guys bent but didn’t break,” Rensing said at the end of the game. “Indiana is a great match up and we had a good game against them last spring so I know the guys will be up for it.”

The Spartans will host the Indiana Hoosiers on Sunday, Sept. 26 at 3 pm in what is set to be an enticing matchup between two great soccer programs. The Hoosiers (4-2-1) come off a 2-1 victory over Northwestern while the Spartans look to get their first victory against a Big Ten opponent this season.