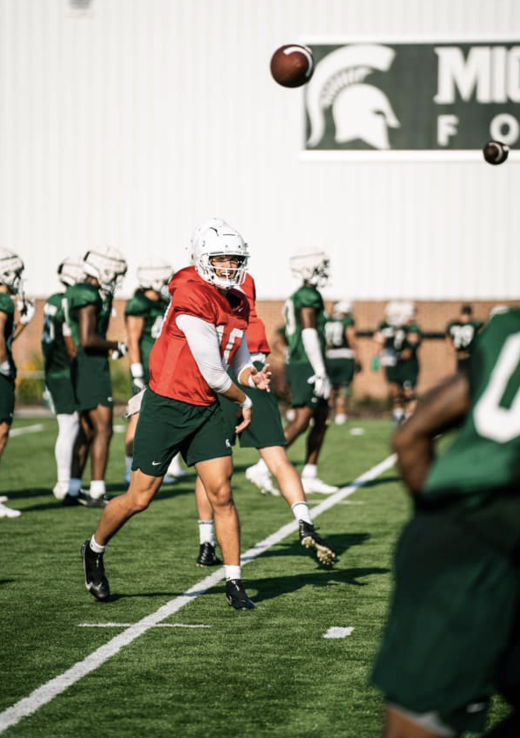 EAST LANSING— Following a four touchdown performance against Miami, Michigan State quarterback Payton Thorne has been named as the Big Ten Co-Offensive Player of the Week, sharing the honor with Ohio State freshman running back TreVeyon Henderson who ran for 277 yards and three touchdowns in the Buckeyes’ 41-20 win over Tulsa.

Thorne, the second quarterback in school history to throw for four touchdowns in consecutive games (Kirk Cousins in 2015 against Indiana and Nebraska), went 18-for-31 with 261 passing yards and four touchdowns in MSU’s 38-21 victory over Miami. Through three games, he is 48-for-77, a 62% completion percentage, with 726 passing yards, nine touchdowns and no interceptions or fumbles. Thorne has also run for a touchdown, coming in the Spartans’ 42-14 rout over Youngstown State on Sept. 11.

He is the second Spartan through three weeks to receive conference player of the week honors; running back Kenneth Walker received the honor after his 264 yard and four touchdown outburst against Northwestern on Sept. 3.   He is currently leading the country with 493 rushing yards.

Going back to last season, Thorne has a career line of 12 passing touchdowns, three interceptions, 1,308 career passing yards and a 3-1 record as a starter as well as 98 rushing yards and two scores.