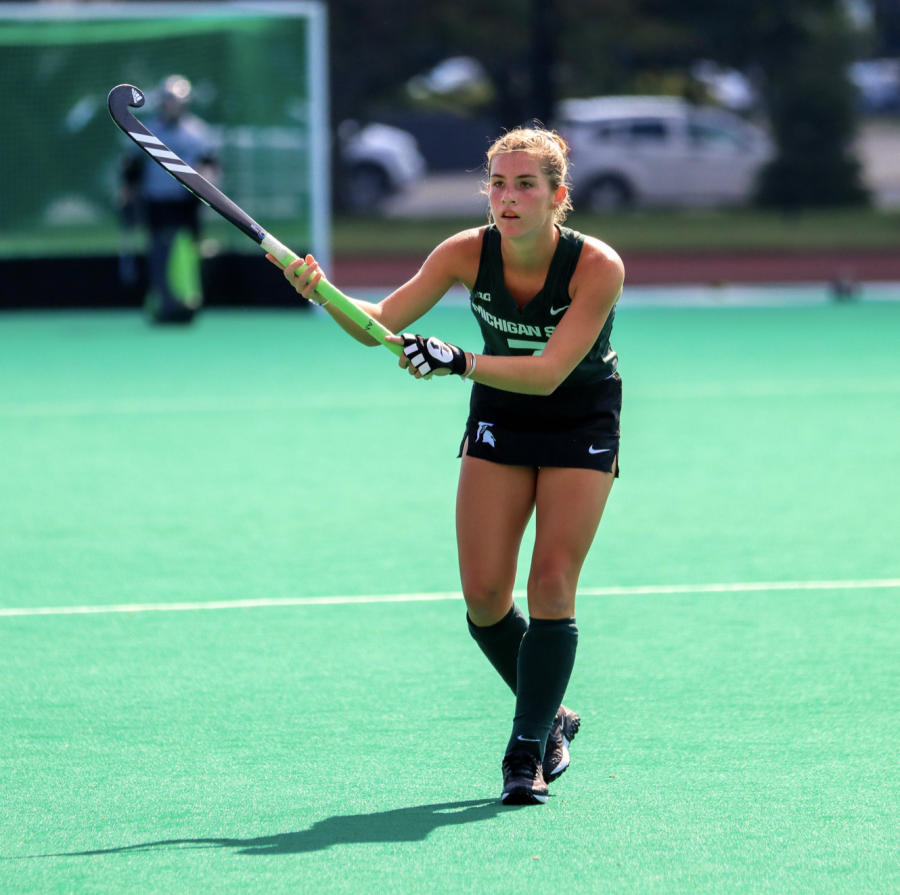 EAST LANSING — The Michigan State Spartans field hockey team looked to be in midseason form on Sunday, dominating in a 6-0 win over Central Michigan. They bounced back after a close back-and-forth loss against Ohio State on Friday, putting the Spartans at 6-1 on the year.

The Spartans were red hot right out of the gate, getting started early with a goal from Merel Hanssen just under four minutes into the game. They didn’t stop there, striking again with 2:11 to go in the first quarter, this time on a rocket shot from defender Nienke Bloemsaat. Forward Meredith Ross also got in on the fun, scoring her first goal of the season less than a minute later to put the Spartans up 3-0 after the first period.

Michigan State found themselves on the defensive for most of the second and third quarter, but their stout and patient defense kept the Chippewas from getting on the scoreboard. With just over two minutes left in the third, forward Lulu Fulton extended the lead to 4-0 with a goal from point-blank range, giving Michigan State some extra insurance headed into the final period.

The Spartans kept the momentum rolling with a goal from Kim Smit less than five minutes into the fourth quarter. Just over a minute later, Ross found the back of the net again for her second goal of the game to put Michigan State up 6-0.

The Spartans have now won 14 straight in the all-time series against the Chippewas, bringing their record against Central Michigan to 19-1. Central Michigan last beat their Green and White counterparts in 2007.

By the final buzzer, Michigan State had racked up 16 shots on goal, while Central Michigan had shot only once. The Spartans’ passing was on point, allowing them to move quickly up and down the field to set up breakaway opportunities and more shots. Michigan State also had a significant 11-4 advantage in the penalty corner tally count, which also helped them to gain the large lead that they did.

“We did a good job of smothering and winning the ball back,” head coach Helen Knull said.

From the start, it felt like Michigan State was in the driver’s seat, never looking back.

“We got up early 3-0, and when you’re in that position, you kind of set the tempo, set the tone,” Knull said.

Michigan State will now look to keep its strong season going at Michigan on Friday at 6 p.m. The Maize and Blue are 6-0 to start the year, but their bout with Michigan State will be their first conference matchup of the season. They also beat Central Michigan earlier in the season, winning 8-0 in Mount Pleasant.