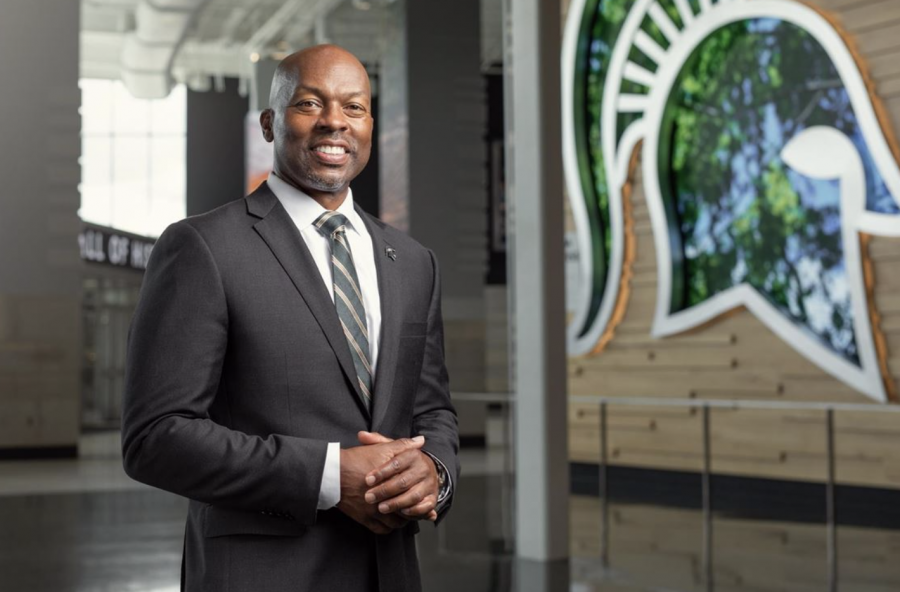 EAST LANSING— If fans of Michigan State athletics were unsure of who new Athletic Director Alan Haller was before Tuesday, they shouldn’t be now.

On Tuesday afternoon, Haller was introduced to members of the media, fans and other distinguished guests, including Big Ten commissioner Kevin Warren, at the Tom Izzo Hall of History pavilion located within the Breslin Center.

Although brief, Haller spent the majority of his time thanking his youth sports coaches, as well as former MSU head football coach George Perles and his family, for helping to mold him into the Spartans’ 20th athletic director in school history.

“I learned a lot of lessons from Coach Perles, (including carrying) a flashlight because it’s going to be a long day,” Haller said, much to the delight of the crowd.

He also pledged to be an athletic director that embraces feedback from the student-athlete body as well as an accessible university representative who embraces communicating with the fanbase via walking through tailgating gatherings before home football games on Saturday morning.

Haller concluded by promising excellence both on and off the field while also calling for unity amongst the Michigan State fanbase, boosters, university delegates and other pertinent parties.

“This is my dream responsibility, this is not a job,” he said. “We are going to do some incredible things together and have a little fun while doing it.”

A former MSU football player, police officer and university administrator, Haller was unanimously confirmed by the Board of Trustees as the 20th athletic director in school history on Sept. 1.