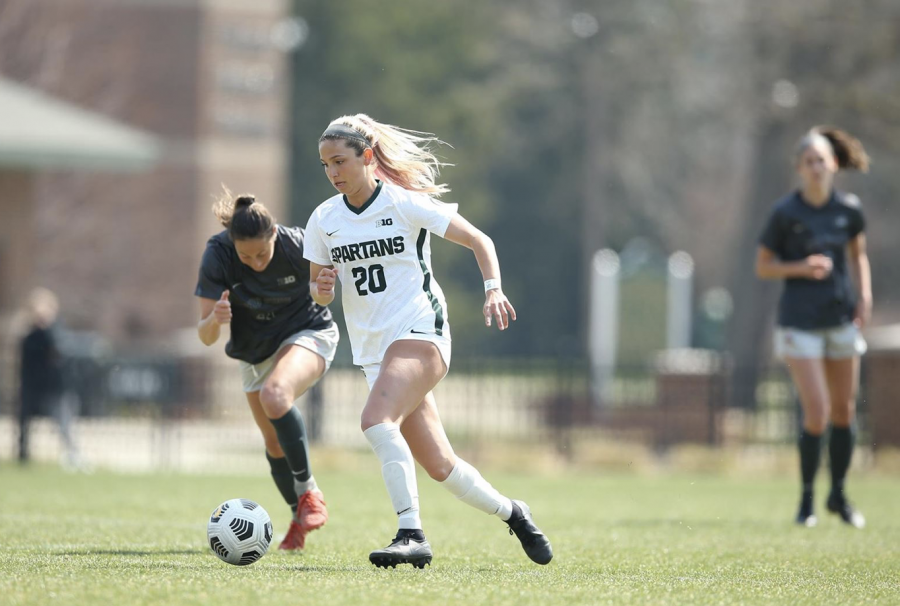 EAST LANSING – After 90 minutes of regulation and two overtime periods, the Michigan State women’s soccer team (3-0-2) settled a 1-1 draw with the Bowling Green Falcons on Thursday night at DeMartin Stadium.

Zivana Labovic’s penalty for the Spartans in the second minute of the game was canceled out by Maya Dean in the 88th minute, when the Falcons sent the game to overtime.

It was similar to their last encounter in 2019, when the Spartans edged out a 3-2 win in overtime behind a 93rd-minute winner by senior forward Gia Wahlberg.

“There was a series of a lack of discipline in the last 90 seconds that led to the equalizer,” Michigan State head coach Jeff Hosler said. “Unfortunately, it was the way the result fell today.”

The Spartans were off to an ideal start after Labovic converted a penalty in the second minute. A handball inside the box from the Falcons resulted in an early penalty against them.

With that goal, Labovic recorded her second goal of the season – tying her record from her freshman season in the Spring.

“The first five minutes were really important and getting that [goal] was a great start,” Labovic said. “We’ve been working on getting crosses for goal-scoring chances all week.”

It was not until the 34th minute when the Spartans had their best chance to double the scoring. Freshman forward Jordyn Wickes dribbled past two BGSU defenders and her right-footed curling shot slammed the crossbar.

With little action from BGSU in the first half, the Spartans went into the break with a 1-0 lead. The Falcons were slowly making their way to goal but controlled defending from seniors Abby Gardiner and Samantha White prevented them from equalizing in the first half.

“We played a really good first half,” Hosler said. “We knocked the ball around pretty well, but we ran out of final third moments [towards the end].”

The Spartans came out of halftime with three forwards instead of the usual front two. Ava Cook, Camryn Evans, and Wickes were the ones on the hunt for a second goal to start the half.

Bowling Green had a great chance to equalize in the 52nd minute, when a powerful shot from Kennedy White was blocked by White for the Spartans. The attacking move from the Falcons had the Spartan defense on its heels as they moved closer to Lauren Kozal’s goal.

“I rely on my teammates to keep pushing me and each other through everything,” Kozal said.

With a largely uneventful second half, the 88th-minute equalizer by BGSU forward Maya Dean came off a series of rebounded shots inside the six-yard box and Dean capitalized when she got the ball.

“A lack of focus killed our style of play,” Hosler said. “Bowling Green was direct and played the way they wanted to.”

After 90 minutes of regulation, the referee announced that the game would head into two overtime periods.

Labovic and Wickes were subbed back into the game at the start of overtime to try and win.

Cook nearly won the game for the Spartans midway through the second overtime period after Bowling Green lost the ball in their own half and Cook attempted a shot with the Falcons’ goalkeeper out of position. Cook’s shot was off target but the Spartans pushed to find a way through to the goal.

After 110 minutes the Spartans settled for a 1-1 draw against the Falcons – unable to recreate the confrontation back in 2019.

“The good news is we have a full week to get ready for our next opponent and we’ll spend a lot of time on the training grounds,” Hosler said.

The Spartans will begin a three-game road trip starting with the Oakland Grizzlies in Rochester, Michigan on Sept. 9.