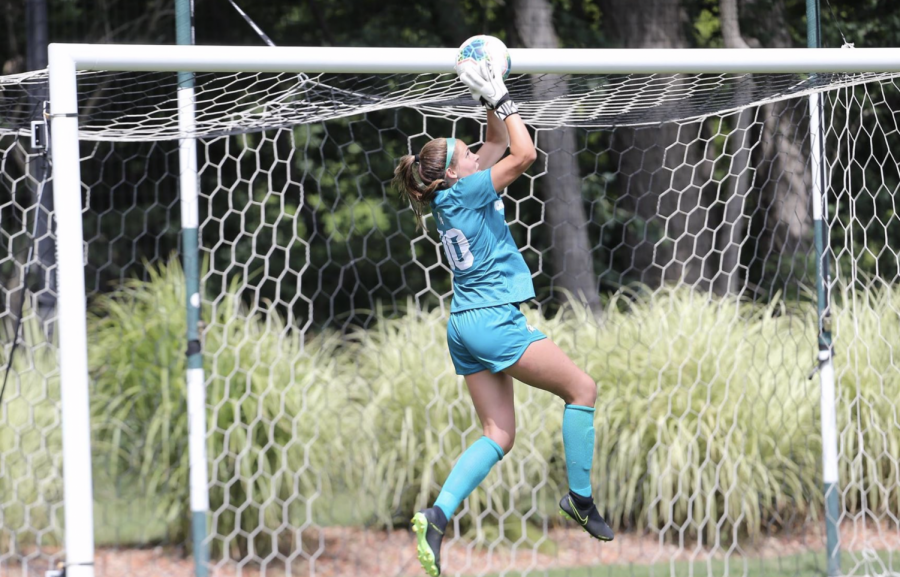 EAST LANSING — In a historic first-ever meeting between the two schools, the Michigan State Spartans needed extra time to remain unbeaten en route to a 1-1 tie against the Florida Atlantic University Owls.

“I thought our group applied the scouting report and tactically came out and did exactly what we needed to do for the first half, for the first time this year and were effective for that whole 45 minutes,” head coach Jeff Hosler said. “Where we’ve got to take the next step is when you do capitalize, especially early in the match, you stay and keep your foot on the gas and try to get a second one.”

The Spartans started out red-hot with graduate transfer Ava Cook and junior Lauren DeBeau wreaking havoc on the Owls’ defense. In the 7th minute, DeBeau found herself with time and space after beating FAU’s Madeline Crow on the outside and went for goal.

The ball was initially saved, but the rebound was tucked just inside the far post by Cook, who has now scored in consecutive games and has three goals this season.

“The goal today was something that we always talk about,” Cook said. “No matter what you always follow the shots because you never know what’s going to be fumbled or caught or anything like that.”

The partnership of Cook and Debeau has proved to be effective for MSU. The two connected for MSU’s only goal against Central Michigan University last Thursday and have scored or assisted on four of MSU’s nine goals this season.

“A lot of people said, ‘I don’t know how she [Ava] will do, she came from Division II and now she is at Division I.’  “I mean there is no difference, she plays the same way,” said DeBeau. “She is a goal scorer, a leader, and just a great person to play with. I’m sad I only have her for one semester, but I’m keeping her as long as I can.”

The Spartans midfield excelled against the Florida Atlantic defense. Seniors Abby Gardiner and Sam Sklarski were keen in stopping the Owls from using the middle of the pitch to go forward. The Owls had to resort to the wide areas where Spartan defenders were waiting.

“Where we lacked discipline a lot up in Mount Pleasant earlier this week, that came through in spades today,” Hosler said. “I think the keyword of the day is that when we were disciplined, we were effective.”

The Owls did have their chances in the first half and ultimately earned a penalty when DeBeau committed a foul inside the 18-yard box. Forward Bri Austin stepped up to take the penalty for the Owls and slotted it past MSU goalkeeper Lauren Kozal, who dove the opposite way. It was the first goal conceded by Kozal after earning three consecutive clean sheets to start the season.

“We had a couple of really good opportunities that never materialized because we just missed an open player, or missed an open pass, took a bad touch,” Hosler said. “It is great to be undefeated through four matches but we’ve got to learn how to have that winner’s mentality and capitalize when momentum is gouging our way.”

MSU and FAU traded blows in the second half, but both failed to convert in the final third.

In the 68th minute the Spartans had two great scoring opportunities. DeBeau had her best opportunity of the game  when her shot from inside the 18-yard box almost found its way past Amit Cohen, but the freshman goalkeeper made a great save on the goal line, keeping the score deadlocked at one.

Both teams continued to test each other with scoring chances being created at both ends favoring the Florida Atlantic style of play.

“It has got to be a lot better. That is the one area that, for as much territory we held, half chances we generated, it’s got to be better,” Hosler said. “We also have to be patient with that because it is not a group, historically, that’s been on the front foot and playing an attacking style of soccer.”

The Spartans generated the last chance before the end of regulation time in the 89th minute when Bella Jodzis pushed a long range shot just over the crossbar. The game would eventually go into a sudden-death overtime with two 10-minute halves giving the both teams a chance to regroup.

“I thought the second half we got a little loose and the game got stretched and that plays into their front-runners, and their ability to run with pace with and without the ball,” Hosler said. “The conversation between both overtimes was just the tactical pieces and adjustments we needed to make.“

The Spartans had the best chance of extra time when Gardiner’s shot was saved on the line by Cohen. MSU amassed seven shots in the overtime period, including three on goal, but could not finish any of their chances.

“A lot of it is still new,” Hosler said. “It’s a little bit of a stinger to come out of this with a draw, but there’s a lot to build on.”

The Spartans return to DeMartin Stadium on Sept. 2 when they host Bowling Green at 7:00 p.m.