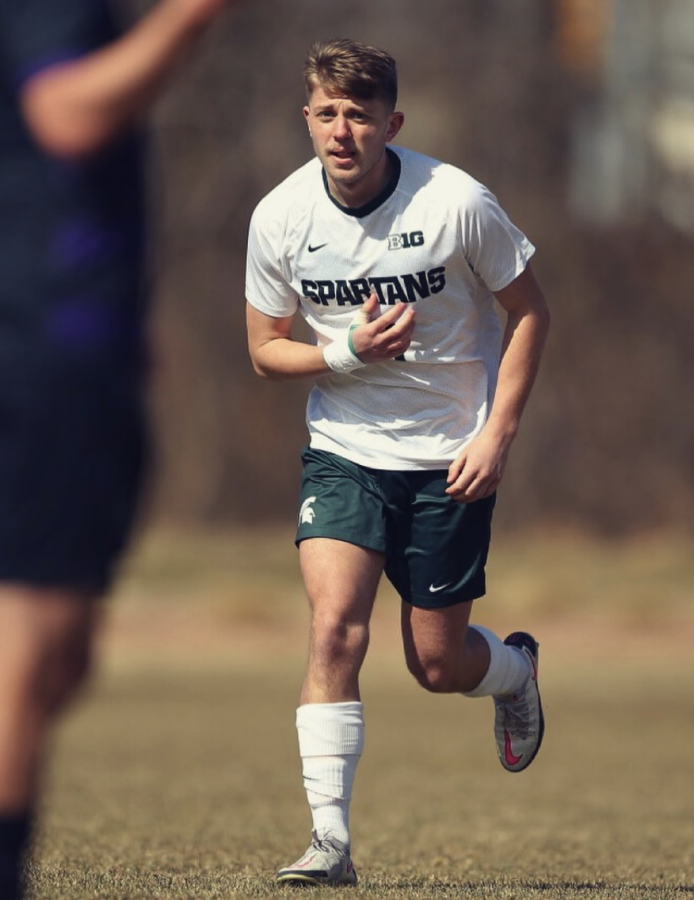 EAST LANSING— The Michigan State men’s soccer team kicked off their regular season with a 2-1 win over the Cleveland State Vikings at DeMartin Stadium on Thursday evening. MSU midfielder Michael Miller’s late first half free kick secured the victory for the Spartans in front of a packed home crowd.

“It was great for us to get the first goal; we didn’t like giving up one right away,” head coach Damon Rensing said. “We found a way to come back, and then we held on pretty well.”

The Spartans entered the game with three exhibition wins under their belt over Schoolcraft College, Butler, and Purdue Fort-Wayne.

Forwards Gianni Ferri and Farai Mutatu started up top to begin the game, and both had an impressive first outing this season.

Ferri had a vicious shot swatted aside by Vikings’ goalkeeper Omeed Naeemy in the 13th minute of the game following a quick attacking move between him and Miller at the edge of the box.

MSU defender Chase Inscho was shown an early yellow card in the 22nd minute after a late tackle outside the Spartans’ box. Inscho would later be replaced by redshirt senior defender Dante Morrissette to potentially avoid being down a player.

At the 23-minute mark, a cross from Mutatu on the right wing found Ferri inside the box who confidently volleyed it past Naeemy, making it 1-0. The Spartans were off to a hot start after missing chances early on.

“It was hard for us to break them [Cleveland State] down at times, but we started to open things up over time,” Rensing said. “I thought we were pretty patient.”

Not long after Ferri’s goal, the Vikings responded with one of their own to even the score at 1-1. Vikings midfielder Jannis Schimdt poked in a rebounded effort past senior goalkeeper Hunter Morse after a cross from forward Julian Pellegrini scrambled past the Spartan defense.

The Spartans appealed the goal to the referee after Morse collided with a Vikings player in the process, but the goal decision stood.

In the 38th minute, the Spartans were rewarded with a free kick outside the Vikings’ box after defender Saahb Kular tackled Mutatu on a counterattack. Miller stepped up to take the kick for the Spartans from 25 yards out and hit a powerful knuckleball past Naeemy to make it 2-1.

“We worked really well today and we grinded out this win,” Miller said.

Last season, Miller registered two assists in seven games but could not find the back of the nel. On Thursday, he went back to scoring memorable goals like the Olimpico goal against Wisconsin two years ago.

Miller was part of the Spartan team that went to the semifinals of the College Cup in 2018.

The Spartans entered the halftime break with a narrow 2-1 lead, but were the more offensively driven of the two teams with six shots on goal. Morse had three crucial saves in the first half that kept the Vikings from scoring another goal.

“We went with the same game plan we had before [in the first half] and we ended up with the win,” Miller said.

To start the second half, senior midfielder Jack Beck was given time to rest and senior Louis Sala started in central midfield alongside sophomore Jack Zugay.

10 minutes into the half, MSU defender Luke Morrell was given a yellow card after a late tackle on Kular. The match would end with 10 yellow cards between the two teams.

In the 62nd minute, Ferri was denied again by Naeemy after his left-footed effort was blocked by the sophomore netminder.

The Vikings had their best scoring chance to tie the game in the 67th minute where Pellegrini’s shot missed the far post off a cross by a couple inches. Cleveland State continued to find avenues to goal but could not find many clear options.

“We limited them [Cleveland State] to not many quality chances- just a break or two,” Rensing said.

MSU secured the 2-1 victory after 90 minutes in East Lansing to start their regular season off on the right foot. The Spartans will host Akron on Monday, Aug. 30 at 7 p.m. for their second game of the season.