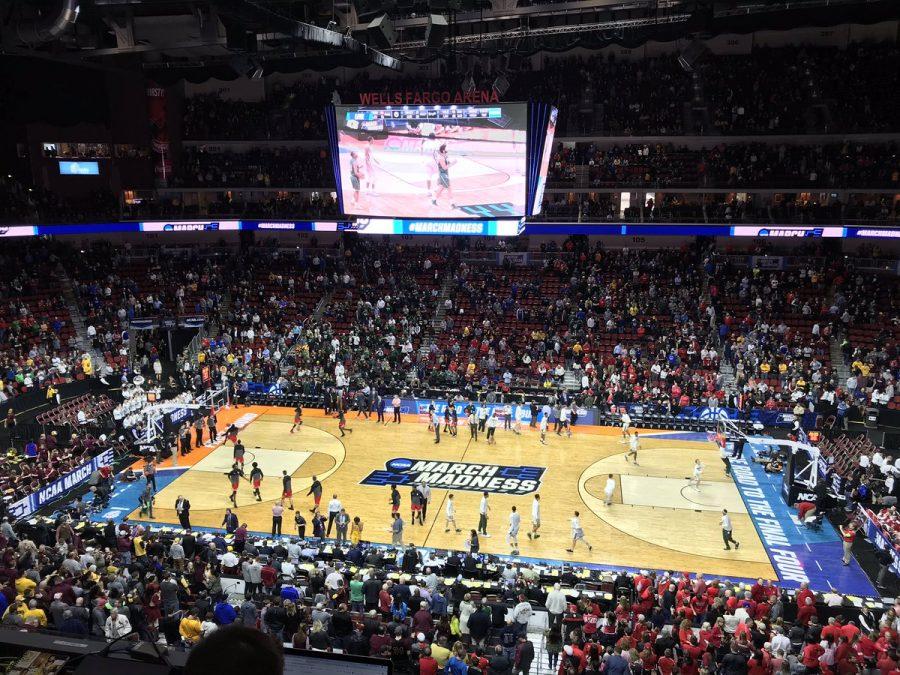 DES MOINES, Iowa — It wasn’t quite Middle Tennessee, but it may not have had to be.

Second-seeded Michigan State squeaked by first-round opponent Bradley on Thursday afternoon, holding a one-possession lead with as little as four minutes left. Even with a seemingly weaker opponent on the horizon in tenth-seeded Minnesota on Saturday, it may not be exactly straightforward for MSU to head to Washington, D.C. next weekend.

Kenny Goins, for all he’s been to this team over the last two months, may be the case in point. Although he played excellent defense in collecting nine rebounds and a pair of blocks, the senior managed just three points in 38 minutes, missing all seven of his 3-point attempts and making just one of his 10 attempts from the field.

Going cold from the outside at this point in the season might just be what keeps MSU stuck in the first weekend again. With all the minutes he’s logged in the past month, how much more does he have left to give?

“They usually say a shooter needs to shoot to get out of a slump,” Goins said. “Just have to stay confident, stay shooting.” What became telling was what happened late in the game. Goins continued to have a solid look here or there from outside. The Goins from two weeks ago would catch and shoot. Instead, down the stretch he opted instead to find Cassius Winston, who as is custom delivered for Tom Izzo.

The junior had a game-high 26 points on 8-of-17 shooting, but to Bradley’s credit, just four assists. All the talk postgame will be on Tom Izzo’s actions towards Aaron Henry down the stretch in the second half, but Winston was one of the cooler heads that prevailed in the huddles. Izzo postgame was not necessarily cool throughout, but after being asked about talking to Henry late on, he paused and looked around.

“I thought Cassius Winston did the best job of leading from when we walked in this building that he’s done in his career. You know why that happens?” He waited for an answer. Someone suggested that it was because he stays on his players. “You stay on the task. Day after day after day. You know what? I’m so damn proud of that kid.”

Plenty of people were quick to go to Izzo’s interactions with Henry in the second half heading into huddles, claiming that Izzo may have overstepped as Winston and others had to rein in MSU’s head coach during one particularly fiery outburst. If you’ve watched Izzo for the last 10-15 years, I’m not sure you can really be too surprised. He does what he does to players because it works. There’s a track record of getting guys to do more with less.

If he didn’t think Aaron Henry could take it, he wouldn’t have recruited him.

Sure, it may have been a little angry – but when this team has put it all on the line for the past three weeks, losing to Bradley would be a slap in the face to the program. Now, on the quick turnaround MSU must remain together. Getting caught early on the way they did against Bradley isn’t a good idea now, as Minnesota is vastly different than the outfit that MSU beat by 24 points back in early February.

There were still the shades of 2016 in there – Bradley made some difficult shots, as did Middle Tennessee State. But 2019’s team stuck in and dealt with BU runs. There wasn’t really a point where MSU was dying for a basket or powerless to stop the Braves defensively.

With a familiar Golden Gophers team on the other side Saturday, the matchup seems a little bit better for MSU. Izzo will be able to go to Nick Ward a touch more often than he did Thursday. Ward had 8 points in just over 10 minutes of game time. Minnesota head coach Richard Pitino goes bigger up front before he goes small, which may lead to a bit more of Ward and Xavier Tillman on the floor together.

“They’re a completely different team than the one we played,” Izzo said. “They’re more of a traditional team. Is that gonna help us? I don’t know…I think the coverages will be a little easier for us.”

If his team responds the way Izzo will want them to, the coverages won’t be the only thing that’s easier.