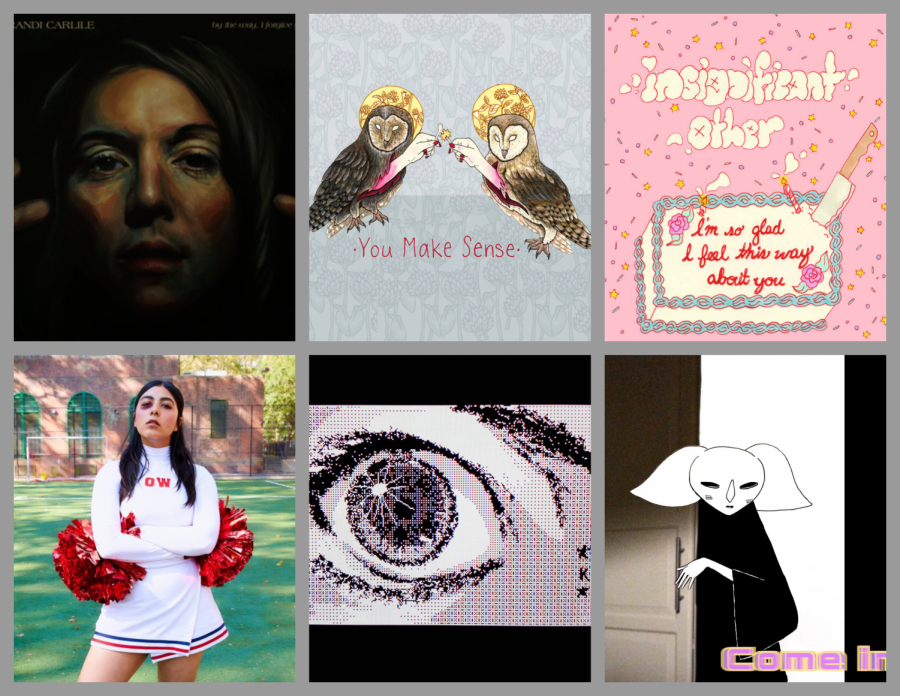 Wherever you look across the modern music landscape there are so many LGBTQ+ artists making excellent music. As Pride Month comes to an end, we’re lifting up some of our favorite LGBTQ+ artists. Whether you’re looking for folk, shoegaze or something more, here is a list of LGBTQ artists that we love.

One genre of music that doesn’t always get as much attention as it should get is folk, and Brandi Carlile is one of the greats in folk music today. She has major range, from big songs like “The Joke,” to soft ballads like “The Eye” and rock anthems like “The Story.” Every song of hers has something new to discover, so if you’re looking for something to widen your musical variety, definitely check out Brandi Carlile and her newest single, “I remember everything.”

Based out of Montclair, New Jersey, Hit Like a Girl Brings offers a vulnerable look at relationships, breakups and all the sweet and awkward bits that come in between. Artist Nicolle Maroulis fuels the indie pop-rock project through their deeply emotional and confessional lyrics. From stories of falling in love, to the anxieties of long distance relationships and saying that first “I love you,” Maroulis recounts experiences that are all-too-relatable for any hopeless romantic. Maroulis even bares their heart on the subject of gender identity in “No More Dysphoria,” named after Maroulis’s nonprofit which provides financial assistance for trans and nonbinary individuals through major steps in their transitions.

You can stream their newest album, Heart Racer, on Bandcamp alongside most major streaming services.

Insignificant Other is a queer pop project headed by Simona Morales and based in Birmingham, Alabama. Their debut album, i’m so glad i feel this way about you, takes the listener through a musical exploration of the messy emotions of adult relationships. From the tongue-in-cheek lyrics of the album’s title track to the dreamy confessions of “Freya,” each track unpacks a new set of feelings, frustration and regrets alongside beats that are almost impossible to keep from swaying along with.

You can stream i’m so glad i feel this way about you as well as the band’s other works on Bandcamp.

Whether you’re looking for hard-hitting punk tracks steeped in adolescent angst, or emotional anthems of love and longing, Pom Pom Squad is sure to catch your ear. The Brooklyn-based indie punk outfit subverts the aesthetics of American suburbia to present a decidedly queer take on topics like heartbreak, vulnerability and identity. From punk inspired tracks like “Lux,” to the indie-rock tones of “Head Cheerleader,” Pom Pom Squad showcases a wide range of emotion as artist Mia Berrin explores and takes ownership of her identity as a queer woman of color.

You can check out Pom Pom Squad’s debut album, Death of a Cheerleader on Bandcamp alongside other major streaming sites.

sonhos tomam conta is the music project of a university student named Lua, who currently resides in Saõ Paulo, Brazil. Delicately balancing the genres of Midwest emo, shoegaze and blackgaze, the listener treks though an emphatic, emotive and cavernous marathon of personal and societal torture with each listen. sonhos tomam conta shows the listener an intimate, yet grotesquely vivid portrait of herself constructed out of their own confusion, depression and agony. Within the alluring and angular walls of sound lies a siren’s howl that is equally cathartic as it is catatonic.

You can listen to their album, Wierd, on Bandcamp here. Her sophomore record, Hypnagogia, releases July 2 via Longinus Recordings.

One of the most celebrated queer artists at the forefront of DIY is Sweden’s Weatherday. Weatherday is one of the progenitors of experimentation within emo’s fifth wave, and is partially responsible for the recent injection of abrasive textures and noise in the current zeitgeist of DIY. Their 2019 record, Come In, is a masterwork of noise pop, Midwest emo, and lo-fi rock, which combines granular walls of sound with heartfelt lyrics and raw performances. Anyone that has come out can always look towards Come In as a benchmark of queer expression in the sprawling metropolis of underground music.

You can check out their album Come In, as well as their discography on Bandcamp.