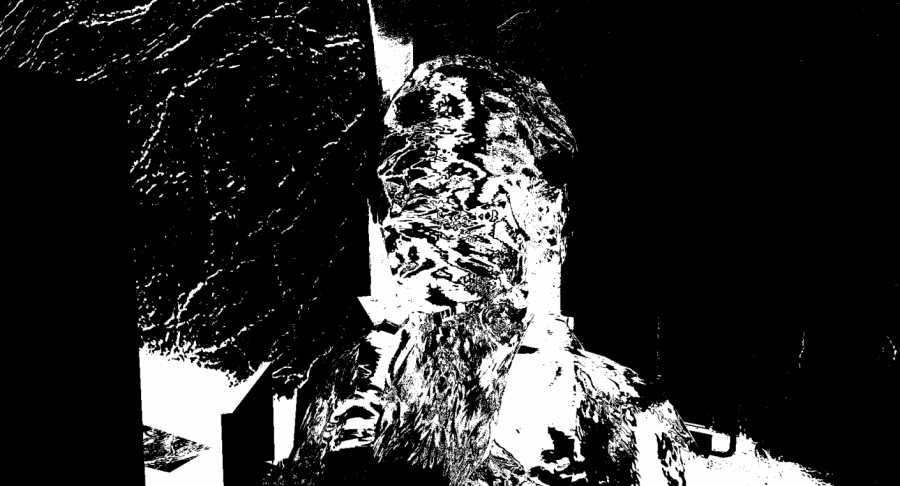 Clean Slate is a plunderphonics artist based in the United States who recently signed to netlabel New Motion, Last month, they put out their first release for New Motion, Paradise Tension. I sat down with them recently to talk about the intricate process that went into this album and what all of this means for Clean Slate’s future.

L: My first impression from Paradise Tension is that it’s a very noticeable shift from what you were doing on World Circuit, which was atmospheric but still relied on a lot of percussive, drum and bass rhythms. This is a whole new ball game, with all sorts of samples and sequences coming in and out at will. What sounds were you trying to bring together on this project?

C: I had completely different processes between making World Circuit and Paradise Tension. World Circuit was kind of going for a pure video game soundtrack-type feeling. It was all stuff I had composed myself out of sample packs and the like. Paradise Tension was kind of the opposite direction, where I took a much more experimental, plunderphonic approach. I was inspired by a lot of different artists to take that shift. It’s not like I’ve lost that kind of World Circuit edge, it’s just something that I’ve integrated a lot of different things into.

C: I would say that I don’t consider what I make vaporwave, but some of my influences are definitely in that sphere, artists like Nmesh. He made some really great albums like Pharma. Also, chris†††. His work was definitely something I saw as very striking. Outside of the vaporwave circle, I enjoy artists like Machine Girl. I’ve worked with a lot of different inspirations to get this together. A lot of the reasoning behind the album was because I’ve picked up this method of creating music over the last year and a half where I create a lot of short loops or concepts, and then I come back to them later and start compiling them to see how they fit together. I started out with this big clay container of loops and such that I then kind of self-mixtaped. In the case of Paradise Tension, it came together really well, and I feel good about that method. I’ve also been able to do some more classically structured stuff. It’s not purely plunderphonic stuff that I’m doing now, but I had fun making it.

L: You said that this method sort of emerged over the last year and a half. Garnering from Bandcamp, it seems that this album was recorded from mid-2018 to September of 2020. Was this the kind of project where the picture slowly emerged over time, with the method developing as you go?

C: It’s pretty interesting how this album came together because I created this album about three different times before releasing it the way it is now. The end product is probably around 40% of the little loops that I created over the course of this album. June 2018, that’s like pieces of an old project that never came to light that fit together perfectly in the last half of the album.

L: This album seems to be soaked in a very wet ambience. It’s not even something that struck me as vaporwave ambience, but almost like PS2 startup ambience. What kind of atmosphere were you trying to channel here?

C: I think that an important kind of atmosphere for what I create is something subconscious. I like the Y2K aesthetic, but you wouldn’t tell that at first glance from the stuff I make. I like being able to create something dreamlike. When you think “dreamlike,” a lot of that is hazy ambient stuff, but I think that there’s a much more encrypted definition behind that, that I like to explore where I can.

L: Could you ever see that Y2K aesthetic emerging more blatantly in your music?

C: I’d like to see that! I’ve seen that over the course of the last four, five years. Not like mainstream mainstream, but I’ve seen pushes and I’ve seen people agree that it’s a cool thing to revive. Personally, I’m banking on DVDs making a comeback in Bandcamp circles, like how minidiscs came back.

L: For me, the title Paradise Tension is also very alluring. Was there any sort of reasoning behind that?

C: When I created the title, it was to evoke a sense of feeling something wrong when there’s nothing wrong visible. It’s kind of a sense beyond the senses. It could also be kind of an anxiety thing as well: if you’re sensing something that’s not there, there’s a kind of regret to not being able to see the fear that you’re feeling. It kind of just came to my head at some point, I don’t remember when I decided to name it that. I have two folders in my music folder labeled “Project Paradise Tension.” It just worked out really well for the album.

L: Most of the loops on this album kind of float in and out, but what really struck me was the very long splice of “Exile Vilify” [by The National] at the end of “Tight Spot.” What motivated that decision as opposed to some of the shorter loops?

C: Admittedly, I’m a big fan of the Valve games. I also liked having a breather from the tightness of the first half of the album. That was at “Tight Spot,” which floats right into the second half of the album, which is a lot more ambient. I think it works well as a transition. The album is split into two sides, which is easier to see on the cassette. You have the first half, which is a lot more beat-based, and the last four, which are a lot more ambient and environmental. This is the tether between the two.

L: This album itself is something of a milestone, given that it’s your first album on the netlabel New Motion. What has your experience been with that community?

C: I’ve had a very good relationship with the creator of New Motion for a few years now. They’ve had some other projects that I’ve gotten to see and help with here and there. I’m still kind of reaching out to this new experimental group between New Motion, Dismiss Yourself, and No Agreements. It fascinates me. I met the creator of New Motion through the vaporwave scene but we’ve both found our own experimental edges that came together when producing this.

L: This album came at a time where quarantine is opening up for at least a lot of people in North America. Following that, how do you see this material appearing in the future? Could you see yourself doing digital sets of this material or even live performances?

C: I would be really interested in the concept of a live set. The way I work could be hard to translate into a live set, but I’ve had fun making DJ mixes. I have a few from a few different events on my Bandcamp, and I kind of construct them the way I do my albums, in the way that I have a little intent and theme with them. As far as a live set, I wouldn’t turn it down that’s for sure. It’s just something that I might have to adjust my sound for if I want a genuine live experience.