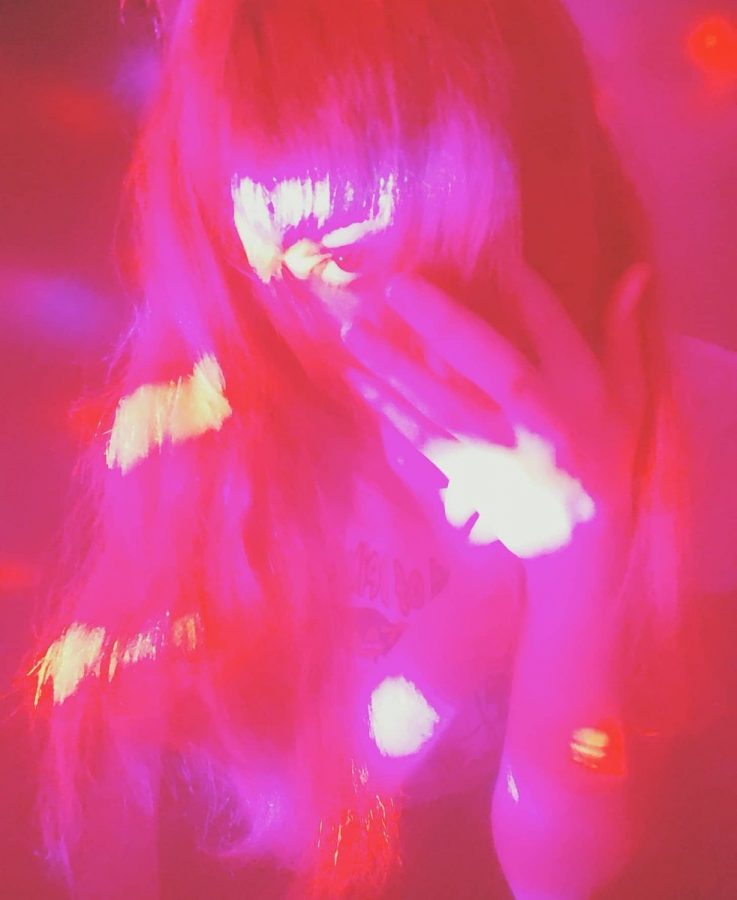 Murrumur is the digital pop project and the pseudonym of April. April has released music under the Mechanical Museum name before, but debuts today on No Agreements with her album Magic for Beginners. Last week, I had the opportunity to talk with her about the album, the ideology behind certain genres of music, and on being a digital pop artist who hates computers.

L: So first off, I’m hearing a ton of different sounds coming together on this project, from sort of a hexd-style distortion to many of these songs, to the drum and bass rhythms on almost every track. What sound palettes did you draw from most in creating this project?

M: Well, I guess the thing to be the most apparent about is that this project is less me taking purely musical inspiration from other things, and more so me feedback spiraling into myself, mostly over a winter where I was really physically ill. Of course there’s a large degree as to how a lot of my contemporaries play into that — they’re most of the people I know at this point. I love all of the music by my contemporaries, and there are clear reflections but this project is mostly based in that feedback spiral. I was mostly really isolated and listening to a lot of music that’s really outside of what other people I know are probably listening to lately… just hearing a ton of Appalachian folk music, early country and ’50s jazz music up to ’80s ambient. I was mostly just trapped across decades I’m not physically in. It’s just a lot of more eclectic stuff than what a lot of people I know probably are into right now, and there is a large degree as to where these things play into what I’m writing here, just to a more abstract degree and ideological than a literal one.

L: Ideological? To what degree?

M: When I say that a lot of it is cultural or ideological, what I mean is that it’s less about the sound itself and more about the culture and history of this music influencing it. I’ve become pretty divorced from modern culture.

L: One of the other things I’m noticing on this album is that there’s a lot of tonal contrast. The first half of the album has a very digital quality to it but is very forgiving, but then there’s a much more intense feeling in songs like “Tinydeath” or “Hitting the Spiral.” Was there any method to how these contrasts are balanced?

M: A lot of listening back through the tracklist. The tracklist that’s in the final version of the record is drastically different from the one that I originally had. A lot of these songs are just completely different from how they were in the original tracklist, from when I first made them. There was a lot of listening back through to find a way to balance all of these different sounds while trying to be cohesive, which was pretty difficult because there’s a lot of consistent tonal shifting. The way that digital music goes, I feel that it’s usually connectible to some degree to roots stuff compositionally. I feel like I write and compose stuff in a certain way that’s recognizable enough to fit with these certain styles, but so much of this record is a lot of different voices in my head trying to clamor for control and then my actual meatspace body trying to mediate that into something cohesive.

L: So this is a project where the full picture emerged over time?

M: Once I started actually making a Murrumur album as opposed to just doing a run of singles as I was doing before, I was like “Okay, this project is already extremely erratic and changes a lot in sound.” I figured I might as well roll with it. Of course there are some people who would argue something about “too many fingers in the pie,” or whatever that term is, but again, I feel like I write things in a recognizable enough way for them to be coherent here.

L: Another thing that I’m hearing is how much more layered of a project this is than the last Mechanical Museum album, which I read as still very arranged but much more minimal. Is there a different artistic objective that you’re trying to reach under the Murrumur name?

M: Absolutely! Mechanical Museum was a very different project than this, and it’s something that I no longer particularly identify with. I wanted to move into more vocal-based music, and just stuff that’s more hard-hitting and… I don’t want to say “radio-friendly” because it’s not. *Laughs* But I did want to make pop music, and that alone changes a lot from what I was doing just making drum-and-bass. It’s certainly arranged much differently, as well as structured differently in the way that I’m trying to write pop songs instead of weird little prog-y, melodic, electronic things. It also comes into play with what I’m experimenting with here, because at the end of the day my own experience with electronic music is somewhat limiting after a certain point. It’s starting to sing on stuff where it opens up a lot of room for experimentation, like “Oh, I want to pull from all these different genres. I want to pull from metal, I want to pull from shoegaze, I want to pull from breakcore,” into this pop context that I’m now doing.

L: I saw that this morning, you were featured on a song by Rat Jesu of Drixxo Lords, who seem to be turning up a lot in this scene nowadays. Is there anyone from the No Agreements/Dismiss Yourself/New Motion/etc. crowd who you’d be hoping to work with in the future?

M: This scene I guess is a lot more expansive and complicated than a lot of people might consider it.  A lot of the scene extends to hyperpop and back, and the sorts of adjacent scenes surrounding that. I don’t really have any super particular interest in making hexd or hyperpop because it’s not something I particularly identify with culturally, but there are certainly tons and tons of people in these scenes who I’d love to work with. I’ve already voiced it to basically everyone in No Agreements that I want to work with them. Drixxo Lords are wonderful and certainly a pleasure to work with. Outside of that, I’d love to work with 8485 or blackwinterwells, where they’re still people in this circle who are informing the music that I’m making in some way or form.

L: On that note, this album seems to have a lot of contributions from other No Agreements members: PK Shellboy on “Magic Honeybee Overdrive”; Luhas on “Bliss”; IX on “Hitting the Spiral,” etc. How much do you think this album specifically was shaped by your experience on No Agreements?

M: I don’t think this album would’ve happened if I wasn’t invited to No Agreements. When Murrumur began as a project, I had shut down the netlabel that I was then running, and it kind of left me musically lost in a sense of not knowing where to go next. Actually having a large social circle filled with other musicians who are doing weird stuff definitely helped to advance where I wanted to go with this project. I had originally made “Magic Honeybee Overdrive” for somebody else. It wasn’t a song I had planned to make myself, but they didn’t use it so I was just like, “How can I turn this into something I’d actually make?” So I threw a breakcore part in there, sang over it and found somebody I wanted on it. PK Shellboy is great! Luhas inviting me to Eva Hakai [No Agreements’ sub-label] back in September and then getting into No Agreements as a result was just an extremely rudimentary building moment for this project.

L: I managed to catch your Mechafest set earlier in the year and was kind of surprised with how songs like “Wires” and “Neural Angel” had been reworked for this kind of setting. Do you think that online festivals are a good platform to play around with certain sounds and see what works?

M: I’d say that there are a lot of good and bad draws to that. If you’re playing a show in meatspace, you walk up there and play the song and you see how the crowd reacts to it, whereas in a digital setting there’s such a long waiting period with what you’re actually able to display. You make pre-made sets like a month in advance, and once they’re submitted you’re done. You don’t really have the room to see how a crowd might react to a type of song when everything is just text. I’m very computer illiterate and I don’t see the full range of emotion through just a Twitch chat or something. I would much rather like to see the reactions from a live crowd. Sets will go up on Soundcloud or Youtube and get plenty of plays, but there’s still no telling as to how this material is really accepted.

L: That’s a very bold admission from someone in a digital pop scene!

M: With being in a digital pop scene, I’m like the ghost in the machine that hates it. I don’t like computers, and with online festivals it is further diving into the machine. Everybody really loves [Serial Experiments] Lain and wants to be one with the computer. I don’t! *Laughs* With the whole online festival thing, they’re fun events, but a lot gets lost on me as opposed to where a lot of people sit with them.